Barefoot Season 2011: No Backup But The Doctor's Note

Now that Spring has sprung and warmer weather has moved in, I've decided to revise my Barefoot Code of Conduct for the 2011 "barefooting season." The idea is to keep it relevant and keep current my own personal preferences and standards related to going barefoot. There are two big changes for this year: 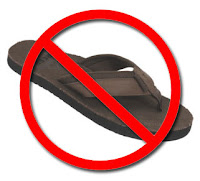 The first change is the elimination of regular "backup" footwear. Up to now, I've kept a pair of flip flops under the driver's seat of our car and minivan. The original purpose was to have a pair of backups available if I needed them for some reason. This included my willingness to comply with signs that required footwear and having the option of returning to my vehicle for them if asked by a business' employee/manager/security to put on shoes. I still had every intention of walking into most places totally barefoot.

The problem that I discovered, however, is that I relied on these flip flops too much. Instead of going into most places without any shoes, I kept slipping on the flip flops and then taking them off inside. This even included stores with no signs prohibiting bare feet! I was getting "soft." Instead of dictating how I was going to live my life, I found myself acquiescing to the assumed preferences of others and avoiding assumed confrontation. I don't like that.

There have been a few occasions in the past when I didn't have any backup footwear with me...and I LOVED it. This rarely occurred, but when it did I felt a sense of relief and a weight lifted off my shoulders. I was pleased with the reality that I had to go barefoot and that I didn't have to make a choice I didn't want to make. The certainty of inevitability can be quite soothing, sometimes.

If I know ahead of time that I will genuinely need footwear -- such as in times of extreme temperatures or when participating in more risky activities, I'll take shoes with me. The overall point is that having those "just in case shoes" on hand has come to an end.

The other big change is that I have acquired a note from my chiropractor. It says "Patient needs to be allowed to be barefoot regardless of location/establishment." (see photo below) I had a conversation with him about my barefoot lifestyle, and he understands the benefits of going barefoot. Because of that, he was more than willing to write up the note. I have heard success stories from other barefooters about how having a doctor's note helped their cause immensely. I haven't been questioned or had a need to use it yet -- and quite frankly I don't know if it carries any real legal weight (I've been researching this) -- but I welcome it as a "tool in the tool chest" when barefooting in public.

I should point out that I decided to ditch the backup footwear before I ever considered getting a doctor's note. The decision to talk to my chiropractor actually came on a whim when I overheard another patient talking with him about one.

This could be interesting. For example, I have a paid membership to Costco, a wholesale warehouse that requires footwear of their members. I have already been asked once (pre-note) to put on my flip flops while in there -- I complied because I had my flip flops in the cart. I like my Costco membership, but I also prefer to go barefoot. Without any backup footwear, I hope that the doctor's note is able to satisfy them enough to allow me to shop unshod. If not, I could consider Sam's Club, but they also have a shoe rule and may not allow me even with a note.

I still want to be able to function in society and purchase the things I need at the price I'd like, and anybody should expect the same whether they prefer to wear shoes or not. I founded The Primalfoot Alliance to advocate on behalf of barefooters because policies still exist that discriminate against us. I like having a doctor's note to show that I have medical backing behind my decision. That said, I also like the idea of being able to shop without hassle at Costco and many other places and not need a doctor's note or any other reason.

Rest assured that I will not back down from my dedication to The Primalfoot Alliance or other barefooters even though I have a doctor's note. The cause is still important and I will still be approached by many managers and security officers. I may "get off" with the note -- we'll see -- but I'll also take the opportunity to educate.

I will be posting again with information about how the doctor's note has worked out. I think it will help in many cases. If you have a chiropractor or doctor who you know is barefoot friendly, consider having a conversation about your desire to go barefoot into places but that you're often discriminated against. It may be that, if you ask, he/she would be willing to back you up with a note of your own.

I ask you, dear reader: What are your thoughts? Do you think the doctor's note will help? If Costco holds fast and rejects the note, should I stand on conviction and kick them to the curb? Have I taken this too far? Please leave your comments and suggestions in the section below.

What Topic Interests You? 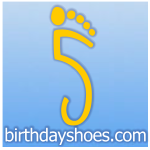 I participated in a podcast discussion of various topics related to going barefoot. HEAR what I have to say! (click logo above)